Busy at the breakfast bar 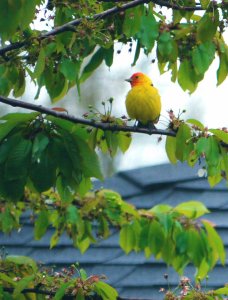 I love mornings at our house. Hank faces me across the table. Behind him, I can watch all kinds of winged and four-footed visitors searching for breakfast just outside our dining room window.

Brother Bill made us a bird feeder that looks like a little cabin. It sits on a pole above the picket fence. A bushy spruce nearby gives emergency shelter to the feeder’s customers. All year around, especially on pleasant mornings, the air is alive with sparrows, house finches, and other birds darting to and from our yard. In June, some hatchlings are flying with their parents but are not yet completely independent. It’s amusing to watch young sparrows trying to perch on the picket points, fluttering and begging birdseed from a parent.

Occasionally, a flash of brilliant yellow announces a goldfinch, the Washington State bird, checking out easy pickings at the feeder. Our neighbors down the hill hung thistle-seed bags in a tree. One spring morning before the tree had leafed out, Hank remarked on the evenly spaced yellow “leaves” along the tree’s crown. I grabbed binoculars. “Those aren’t leaves!” I said. “They’re goldfinches, waiting for the sun to come up.” Sure enough, when the first rays hit, they fluttered down to the thistle seeds.

One morning we watched a beautiful yellow-and-black visitor with a red head…a western tanager. Another day, we identified a heavy-beaked stranger with orange markings on breast and head as a black-headed grosbeak.

Our cat Peanut ignores the birds around the feeder, but any bird perching on the power or telephone lines sends her into fits of scolding and chattering teeth. One day I glanced out to see what had incensed her. A young hawk sat on the telephone line, eyeing the goings-on at the feeder. He launched himself, but the sparrows saw him coming and scooted for the prickly protection of the spruce tree. The hawk landed on the pitched roof of the feeder. One leg slid down the side of the roof. He regained his balance, then the other leg slid out from under him. He looked around, obviously feeling foolish, then flapped away without breakfast.

The robin babies aren’t out of the nest yet, although their bright-vested parents are frequent visitors in the yard. A couple of mornings ago, a sleek robin hopped past the roses, stopped to cock her head and listen, then she darted her beak into the ground. I thought she had a beetle, but no…whatever it was resisted. The robin yanked. Then I could see she had one end of an earthworm. She yanked again and again, leaning back on tiptoes, bracing with her tail. The worm stretched longer and longer. Then, like a rubber band letting go, the worm dislodged, the robin dropped it and pounced. I wondered how she would swallow that long, long morsel of food, but she didn’t even try. She pounded in one place, then another, and finally scooped up four or five fragments of worm in her beak and flew off, fragments dangling, with breakfast for her babies.

The neighbors across the drive have a cherry tree. Every spring it blossoms in a white froth. Petals drop as the leaves unfurl, and before we realize it, green globes of cherries are growing bigger every day. But the neighbors never get to pick them. The starlings keep watch, and long before they ripen, they tug them off the stem. Steller’s jays and crows come too, swallowing them whole (and green). As soon as the cherries begin to redden, robins visit for their share.

The four-legged visitors checking out our breakfast bar are usually rabbits, squirrels, or the neighborhood cats out hunting. But one evening we saw something rustle in the cherry tree. A cat? A small bear? No…we glimpsed a black mask and a ring-striped tail and realized that raccoons like cherries, too. I grabbed my camera, watching through the viewfinder as the marauder stripped the nearby branches efficiently though messily. Leaves and broken twigs showered down as the raccoon reached out to pull more branches close. He balanced on the telephone cables passing through the tree more effortlessly than a tightrope walker, then he moved out toward the end of slender boughs until they dipped dangerously. He worked the tree until it got too dark to see him anymore, leaving only a few cherries for future visitors.

Oh, well. Raccoons have to eat too.

And we are grateful for the chance to watch some of God’s smaller creatures go about their lives, right outside our window.