When my husband suggested a vacation trip recently, the tedium of a long car ride loomed large. Projects needed doing. I preferred to stay in my familiar holding pattern. But obviously, Hank wanted to go, so I arranged with a feline-loving friend to take care of our cats Popcorn and Peanut and to water our flowers.

Hank’s home-town high-school reunion was to be only a little more than 200 miles to the southwest of our home. But we took a long way around to get there. First, we drove north to cross Deception Pass bridge, then south down Whidbey Island. My enthusiasm quickened when I sighted dozens of brightly colored sails moving across the sunny waters near Oak Harbor. From a restaurant in Coupeville, above Penn Cove, we watched dozens more sailboats gliding back and forth in a slow motion race…a lovely serendipity.

We crossed Admiralty Inlet on a ferry so small that every storm halts its operation. Near Sequim we stopped to walk a sandy path topping the dramatic bluffs at Dungeness State Park. The pale bluffs contrasted with the deep blue of Puget Sound far below. Suddenly, a fountain of spray broke the undulating pattern of swells. A whale’s long, dark back broke the surface, then disappeared. Again and again, we saw spouts from at least three gray whales feeding in the shallow waters. More serendipity!

From there we drove on to Port Angeles to 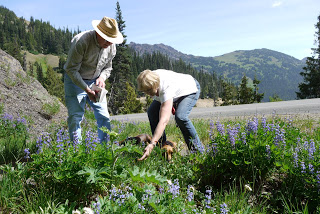 visit my sister Patty. For the first time we
saw Patty’s new home and garden; small
but beautiful jewels reflecting her creative
skills. The next morning, she suggested
we drive to nearby Hurricane Ridge in the
Olympic Mountains to see the wildflower
display. Up a narrow, winding road we went,
heading into the sky. The steep slopes above
and below us wore borders and splashes and
carpets of wildflowers. We pulled off for a
face-to-face inspection. They were lovely.
I have photos to prove it.

From Port Angeles, we drove on toward Neah Bay,

Washington’s westernmost town. The road winds along the Strait of Juan de Fuca, with picturesque sea stacks, wild beaches, and views of distant Vancouver Island. We walked the shore and watched fog drifting in and out and even rising from the damp sand beneath our feet. Another serendipity.

We hiked to Cape Flattery where the Makah Indians once hunted whales. We visited ocean beaches to the south, along Washington’s coast. We stopped at a village called Taholah. A spit piled with huge, silvered

logs and stumps–a graveyard for the bones of old growth forest–guards the mouth of the Quinault River where it slows before discharging into the surf. Lines of stakes curve out into the calm river where Indians still fasten their nets in an age-old method of set netting. I’ve seen Alaska natives on the Yukon and Koyokuk do it the same way.

On Highway 101, between Aberdeen and Raymond, we passed through thousands of acres of forest leveled by 125 mile-an-hour winds in December, 2007. Trees lay like spilled toothpicks, tops all pointing in the same direction, an awesome sight. We’re not supposed to have hurricanes in Washington, but tell that to foresters trying to clean up the mess.

By now I’d lost count of serendipities. We arrived at Washougal, Hank’s former home at the entrance to the Columbia Gorge. After a wonderful reunion with high school friends as well as relatives, we attended his former church. I hugged our 90-year-old friend Hazel and her husband Clias. Hazel had been felled by a simultaneous stroke and heart attack the year before. We never thought we’d see her again…but here she was, walking and laughing and thrilled to see us. I stroked the velvety head of her newest great-grandbaby. These church folks had been my friends for only nine years, but some of them had crossed into old age in that time and young people were now middle-aged. We stood talking with Hazel and Clias about the changes in the church. Clias looked from the newborn to his wife, and said, “Yes, one by one, we come…and we leave.”

My heart flooded with gratitude for one more chance to reconnect with these people we loved. The trip I dreaded had surprised me with such a shower of blessings, I can’t even remember why I didn’t want to go!