Ready for the picking…come and get ’em.

Less than two weeks left in August! Thistledown and fireweed fluff float through the golden air. The native plants in our front yard are well on their way to becoming a mini-forest. Flowering red currants and twinberries are loaded with berries, as are huckleberries, red osier dogwood, and snowberry shrubs. Rose hips are reddening. Flying creatures buzz, dart, and flit through sun and shady patches—black-and-yellow bees and wasps, smaller insects too, as well as butterflies and birds.

The thermometer reads close to eighty, but a feeling in the air tells us fall is near. Is it leftover chill from the cool morning? Is it something added by the changing angle of the sun? Maybe it’s the scent rising from the fields below our hill where crops are ripening. Or the sweet smell of blackberries ready for picking.

Whatever it is, something of my childhood returns to me every year at this time. I remember the giddy anticipation of a new school year—old friends, brand-new pencils and tablets, new things to learn. We’re reluctant to say goodbye to the unstructured days of summer. There’s a depth of sweetness in end-of-summer activities. The cold river has finally warmed enough to spend entire afternoons splashing in the swimming hole. Our mother’s labors in the kitchen make the house smell of peaches and pickling spices. We bring in huckleberries from the woods for her to turn into our favorite jam. And she makes our other favorite jam, blackberry, from the little mountain berries we’ve picked as a family in the high, logged-over areas on nearby hills.

The little berries were hard to find, but we knew our best chance was to search a recently- logged area. The vines sprawled over stumps and dead brush and crept along the ground, hard to see unless we knew what we were looking for. The biggest, juiciest treasures grew in the shade of other plants. When we found a patch, we called the nearest parent or sibling to come share the bounty.

Nothing is tastier than those native blackberries. They can still be found in open, recently cleared spaces, but an interloper has crowded its way into many of the haunts they once claimed…an interloper with larger, more bountiful, easier-to-find fruits.

The Himalayan blackberry came from seeds imported and developed by none other than Luther Burbank, the genius who gave us many new or improved varieties of plants back in the mid-1800s. It’s a vigorous, adaptable grower whose stout, sharp thorns discourage those who try to dig it up. Birds love the sweet fruits and disperse the seeds far and wide. The masses of canes, up to thirty feet long, overwhelm native plant life and crowd it out. It’s a bully of a plant.

Genesis 1:31 says, “God saw all that he had made, and it was very good.” Even those pesky Himalayan brambles have something good about them. The berries are delicious. Hank and I picked a couple more gallons this morning in less than two hours. Tonight we’ll have blackberry cobbler. I’ve already made jam. And we’ll have pies this winter to remind us of these golden August days. 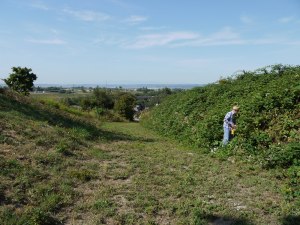 Hank at work in the blackberry patch.