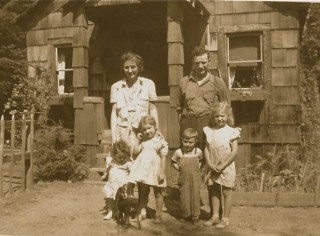 1940–the Rawlins family and the little house on its cedar slab foundations,  just before David was born.

During the Great Depression, my father built a little house in the Robe Valley for his family. His total cash outlay? Less than $50 for the house and $100 for two-and-a- half acres of land.

He salvaged timber from an abandoned lumber mill for the stringers and other timbers used in the house. Since he had no cement blocks, he cut slabs from a cedar log to make the foundation for the 18 by 24 foot house. He placed four slabs on each side and one in the center, then nailed cedar uprights to those. He laid stringers (timbers) across the uprights and a shiplap floor across the stringers. He built the floor several feet off the ground so the house would stay dry. The walls were shiplap covered with tarpaper, then with shakes that Dad split himself. He used salvaged windows and doors.

That snug little house eventually became home to other families. Thirty-three years later, youngest brother David bought the house and remodeled it. One of the first things he did was to replace the cedar slabs with a cement block foundation. He was surprised that the wood had lasted as long as it had.

About the same time Dad built our house, a neighbor just up the road built a house on a wooden foundation. I don’t know if he used cedar or not, but a creek ran through the swamp next to the house, and that plus our rainy climate quickly rotted his foundation. All during our growing-up years, the neighbors often heard him comment on how he needed to fix that foundation. But he never did, and the house sagged and rocked on its unsteady underpinnings while his wife and six children suffered frequent illness due to the damp conditions.

A good, solid foundation is the first essential for any quality building project. The St. Vincent islanders in the Caribbean understand this. My husband Hank and some friends spent two weeks on the island helping a group who wanted to build a church. The Caribbeans had very little of this world’s goods, but they understood the basic principles of building. The Americans brought tools and cement. The islanders had already laid out the shape of their church and collected piles of rock for the foundation.

Americans and islanders worked together digging trenches along the lines marked on the ground. They passed buckets of water hand-to-hand from the water source to the cement mixer, where men mixed water and cement. Then they passed the buckets of mortar hand-to-hand to the person down in the trench who fit stones and mortar together until the foundation rose above ground level, after which they skillfully leveled the top with more mortar.

In this painstaking manner, the foundation took two weeks to build. Hank didn’t get to see the church rise atop it, but he knew, that though it was simple, it would be sturdy and last through the storms and torrential downpours that often sweep across the island.

Jesus once told a story about two builders. One was wise and built his house on a rock foundation. But the foolish builder set his on sand. When the storms came, they washed the sand from beneath the foolish man’s house, and it fell with a crash. The wise man’s house withstood the storms and sheltered those within it.

Jesus’ story is just as appropriate now as it was two thousand years ago. We still need strong moral and spiritual foundations. All around us, we see lives wrecked by bad decisions and do-it-your-own-way building methods. God gave us His Book of wisdom and the gift of common sense to establish a basis for living. We can be thankful indeed for parents or other mentors who pass on values gleaned from God’s Word and the wisdom of history.

Does your foundation need a little work? It’s never too late to rebuild.

For our 10th wedding anniversary, Hank and I spent a week wandering to some of our favorite places. We included a visit to the museum at Washougal, Washington state, on the Columbia River. Hank is working on a legacy of family history stories for his children, and that little museum contains files of information on the early families of Washougal  (where he grew up) as well as items donated by those families. We found one of Hank’s childhood toys on display there. It brought back good memories to him. Here’s his story:

As a young boy, I loved to follow my Grandpa Huckins and his son, my Uncle Joe, around. I liked to imagine myself doing whatever they were doing.

This McCormick-Deering tractor with a Russell
boiler powered the sawmill. 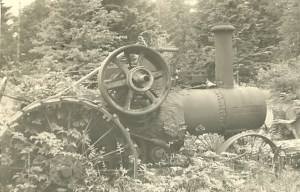 Grandpa and Uncle Joe supplemented the income from their small herd of milk cows by sawing lumber from logs on the home place. Originally, a large steam tractor powered the Huckins’ sawmill. It turned a line shaft which powered two four-foot circular saws and also caused the log carriage to move forward and backward, slicing logs into rough lumber.

In about 1945 they replaced the tractor with a steam boiler and built a brick furnace beneath it to burn slabs of wood from the mill. The fire boiled the water and produced steam to power a stationary single-cylinder steam engine. As a ten-year-old boy, I was fascinated as Grandpa and Uncle Joe heated heavy steel rods in the forge and used an anvil to shape them into hooks. The hooks suspended the huge boiler from the roof timbers of the sawmill. 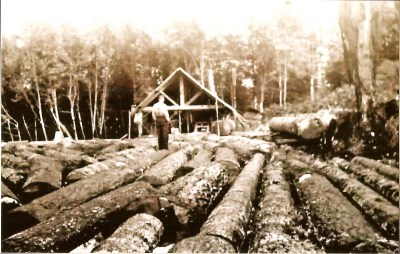 The Huckins’ sawmill, with my dad in his Sunday clothes standing on a log in the log pond.

Eager to help build the furnace, I put too much creek water in the mortar mix and Uncle Joe had to add more sand and cement to correct my mistake. For awhile, Uncle Joe’s smiling countenance clouded over, but as work progressed he returned to his usual jovial self. Imagine the smile that lit my face when Uncle Joe showed me a miniature steam engine like the one in the sawmill. It had been his toy when he was my age, and now he was giving it to me. The boiler held a pint of water. Three little burner cups fit in a drawer beneath it. He soaked cotton balls with wood alcohol and put them in the cups, then set the alcohol ablaze with a match. As it burned, it heated the water in the boiler. With the steam valve open, the steam made a whistling sound. With the valve closed, the steam drove a single cylinder which turned a large wheel, just like Grandpa and Uncle Joe’s big steam engine.

What fun! A side benefit of owning my own steam engine was a lesson in economics. Wood alcohol could only be obtained at a local drugstore at the whopping big price (in 1945) of ninety cents a pint plus three cents tax. That left barely enough of a dollar bill to buy a nickel candy bar. Since money was in short supply my steam engine seldom got fired up. Perhaps that was why it was still in working condition years later when my mother passed it on to the Washougal museum.

One September morning when I was five years old, my mother pinned my name to my sweater and sent me down the long driveway with neighbor and “big sister” Marcella to wait for the school bus. I was so excited I couldn’t stop trembling.

What a day of firsts! My first bus ride. My first day in the big brick building that would be my second home for the next seven years. My first time to sit still for long periods of time until given permission to move. My first teacher. My first time to face more than forty little people my own age, some of whom, though I didn’t yet know it, would become lifelong friends.

Kids who lived in town shared not only school experiences but also out-of-school life as well. They grew up knowing everybody in town and all their stories. Bus kids like me missed out on small-town life, but after-school activities and sleep-overs with friends helped to fill in the gaps.

Because our school was small, our class moved in lockstep through the academic offerings until high school gave us a few electives. Boys and girls took separate physical education classes. Most boys took wood shop. Most girls signed up for home economics, although the good smells of cooking brought the boys clustering around the home ec door in hopes of handouts. We all went to the after-school ball games to cheer for our team, the Tigers.

Our twelve years as classmates flew by. Of the forty or so children who began first grade together, some moved away or dropped out. Others joined us later. Twenty-four of us made it to graduation together.

Then we scattered to follow different paths…some to jobs, some to marry and start families, some to military service, some to college. Many continued the friendships forged in school, although some of us reconnected only at high school reunions.

Now we are all in our seventies. Seven or eight years ago, Nancy retired from her paying job and decided it was time to do what she’d thought about for years. She began calling classmates, suggesting that those who lived nearby get together for lunch. Since then we have met on the 2nd Thursday of every other month for lunch. Spouses come too, as well as a few friends from other classes.

Death has claimed a few of us. At classmate Dick’s funeral last year, we came as a group to say goodbye. We’ve encouraged each other through illness and loss of family members. We ask after each other’s children. We tell stories of our lives. Of course we reminisce about our shared memories.

Some classmates travel elsewhere in the winter but come back to join us in the summer. Others live far away, but occasionally return to touch base. At our last luncheon, seventeen people came.  Of those, eleven of us had started first grade together back in 1941. Sixty-nine years, and we’re still enjoying each other’s company.

Sarri Gilman was talking about Baby Boomers on Facebook in a recent column in The Herald, but what she said is worth remembering, no matter what our age: “…if you do open yourself, you will find that restoring some of these very old friends from the past can be enriching. By the time you get to 50, life has leveled the field. Everyone has had enough reality to realize we are all tender beings, and life is short.”

There’s a lot of truth in the adage, “Old friends are the best friends.” 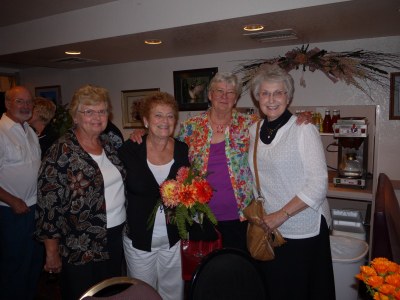