We just completed a sixteen-hundred-mile road trip to and from a family wedding in Canada. Along with cousins Bill and Barbara, we rented a brand-new van for the trip. It came with electric doors and windows, comfortable seating for all seven of us, opera-house-quality music, individually-controlled air conditioning, and room for all our luggage, thanks to Cousin Barbara’s expertise at stacking and packing.

We zipped along through Canada’s Rocky Mountains on smooth, 90 kilometer-per-hour highways lined with high wire fences to keep the wildlife off the road. The government provided frequent rest stops along the way. At night we lodged in motels with all the comforts of home. We were never far from the next restaurant. Bill had his powerful cell phone. I carried my laptop and made use of motel internet in the evenings. I kept in touch with family and could even send them photos taken that day if I wished. 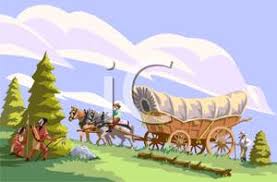 Our ancestors found no broad superhighways, motels, or restaurants when they followed the expanding frontiers of the new world to the west coast where many of our family members now reside. Canadian cousin Vicki, the bride’s mother, shares my interest in family history.  We’ve found stories of our Mayflower ancestors and other pre-Revolution forebears who came to make new lives in the American colonies. Their descendants made their way westward by foot, horseback, ox and wagon. They rafted down the rivers. By the 1800s, my great-grandparents and their family had reached Illinois. When the railroads opened up the midwest, some of them loaded their furniture and cattle on railroad cars and migrated to North Dakota. (At the same time, my mother’s parents were immigrating from Germany, to make their way to North Dakota via Minnesota.)

When the Great Depression combined with dust storms to make farming impossible for them, my parents fled to Washington by train. Dad’s parents and his siblings, including Cousin Vicki’s mother Mary, joined other midwest refugees heading for the West Coast by car. We can only imagine the rigors of that trip, with everyone jammed into an old Model T, my pregnant aunt Amy riding with her husband atop the load of belongings in a trailer.

Now we see our Canadian cousins nearly every year. But when our first ancestors came to America, they did not expect to see their loved ones ever again. When parents bade farewell to their children setting off on the Oregon Trail, most of them knew it was a permanent goodbye. Even in 1936, when Mom and Dad came to Washington, they gave up frequent contact with their families. In their long lifetimes, my parents returned to North Dakota to visit only four or five times.

Though I wept when my own daughter married and moved to Arizona, it’s possible to email or phone her every day. She can hop a plane to come home if she gets homesick. She even vacations in Europe.

We can be thankful for the courage of our ancestors. While seeking better lives for their families, they helped to build a nation. The story of their travails is an heritage for their descendants.

One thought on “Travel, Then and Now”