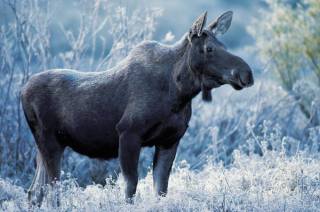 Our friend Dave Penz has spent most of his life taking the good news of the gospel to the native peoples of western Alaska. One of his first assignments was in the village of Shageluk. He tells this story about one of his early hunting trips.

One of his neighbors, Charlie Wolf, was the son of a white prospector and a native mother. Many offspring of such parentage were energetic and ambitious, but not Charlie. He had a beautiful wife and three children, but he barely managed to keep food on their table. Unfortunately, he was an alcoholic.

One mid-winter day Charlie wanted Dave to go moose hunting with him. He owned three scroungy dogs. Dave had a sled and a good team of dogs, so they hitched up all the dogs and headed into a wooded area where few people went hunting. They set up their camp when it got dark.

Next day they spent the four daylight hours trudging through the woods. Snow fell steadily. Just at dusk they came upon six moose clustered together in a thicket. They shot two of them. They skinned and butchered them and hung the pieces in the trees to keep them from animals. By the time they had finished it was pitch dark.

“I know a short way to get back to camp,” Charlie said. Dave hoisted a large chunk of meat atop his backpack, picked up his gun, and followed Charlie through the foot deep snow. It was so dark he couldn’t see where they were going, but something seemed wrong, especially after Charlie had stopped several times, then started off in a different direction.

The meat grew heavier and heavier, and the gun, too, seemed so heavy that Dave considered leaving it behind. If only they could see where they were going. Suddenly he remembered something. “I think my flashlight might still be in my pack,” he said. He dumped the contents. Sure enough, there was the flashlight at the bottom.

Charlie had refused to admit they were lost, but when Dave flashed the light through the woods, they could see their own tracks circling around to where they stood. They were the only people within many miles, and Charlie couldn’t deny it now. Later Dave would use the story in many of his sermons, telling his listeners that most people don’t know they are lost until they have the light of God’s word in their lives.

While Dave repacked his belongings, he prayed aloud, asking God to help them find their way back to camp. Then he stood watching snowflakes fall in the beam of his flashlight. They fell at a slight slant, telling him the wind was from the north. He knew he had to go east to get to camp.

Dave started out, in the lead this time. Now Charlie thought he heard noises in the woods. Wolves! Maybe they had smelled the meat Dave carried and were following them. He was so frightened he kept stepping on Dave’s heels. He continually asked Dave to shine the light behind them to see if it reflected from the eyes of hungry wolves. There were no wolves, but the last time Dave swung the flashlight around to the front, he caught the faint, snow-covered impression of old sled tracks running across a frozen lake. Now he knew where they were. They followed the tracks across the lake and were soon greeted by the dogs they’d left tied at camp.

The next day they took the dogs and sled back to where they’d left the meat. They were amazed to find the long, heavy front leg of a moose a quarter mile away from the rest of the meat. A wolverine had helped itself, and was probably not far away. The two men hung the leg in a tree and Charlie set one of his traps beneath it.

It took several trips to get the meat and hides back to Shageluk. Oh yes. They also hauled home Charlie’s wolverine, which had come back for its prize and got caught in the trap.