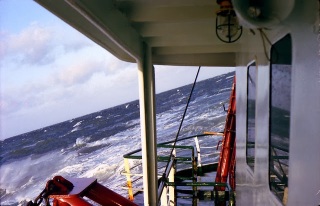 Former commercial fisherman Ti Foltz told me this true story several years ago. I thought it might be a good one to share with Sun Break readers on this foggy morning:

Ti’s trolling boat rose and fell in the cold Alaskan water. He fished alone on that clear summer day, too busy to notice a gray line of fog building on the horizon. The twelve lines from the outriggers on his troller had multiple leaders. Lined with hooks, each leader reached out into water as far as seventy-five feet. Dozens of hooks needed to be loaded with the herring Ti hoped would lure the King salmon.

He watched for rocks as he worked. All around him spread swirling, white-capped wave broken by thousands of jutting rocks. Some disappeared beneath the waves only to pop into view again as the water receded around them. Others, tree crowned, were as big as small islands. He needed to get close to the rocks without damaging the boat or losing his lines. Bait fish schooled along the deep rock ledges and the salmon lurked there to feed on them. The lure of those big Kings made risking the treacherous waters worthwhile.

Suddenly the salmon began to strike hard and fast. As soon as Ti reeled in one line and gaffed the fish aboard, other lines filled up.

As he worked, he realized the sunlight had dimmed. Clammy fog swirled around the boat. Immediately he hauled in his lines, but already the land and rocks around him were blotted out.

Fortunately, he had a compass and charts on board. In the fog, with no landmarks visible, he had to trust them to take him back to port. Depending on his senses to steer a straight course wouldn’t work. His instincts screamed, “Wrong direction!” and he fought vertigo as panic threatened to overwhelm him. Lord, he pleaded, show me what to do.

Then he heard a mournful, muffled wail through the mist. He recognized the foghorn on the cape, right where it was supposed to be. His inner ear righted itself and he felt calmer. With his eye on the compass, he motored slowly through the rock-studded fog and back to safe harbor.

In any situation, Ti concluded, feelings can betray us and cause us to crash. Relying on God’s Word to guide us is like having a chart in front of us and a compass to steer by. Even when feelings overwhelm us and threaten to throw us off course, we can trust God’s Word to brings us through the rocks and into the safe harbor of his perfect plan for us.