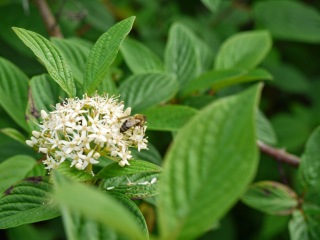 The first full week of January 2015 blew in with icy rain and low dark clouds. Bare branches swished above fallen leaves lying black and sodden on the ground. Not much indicates that summer lurks beneath them, just waiting for the proper time to burst forth.

But in my cupboard I’ve got a couple of jars of last summer’s nectar—honey from the Nixon honey farm near Innisfail, Alberta. When I spread it on my breakfast toast, it conjures a  picture of blooming fields and hard-working honeybees.

The Nixon honey farm has seven thousand hives scattered over the prairies among fields of canola, alfalfa and other crops. The bees forage in these fields to produce that honey.

Each hive consists of boxes stacked four high, on pallets.  Each queen bee lays 3000 eggs per day. She fills up the lower two boxes with eggs. This is where the bees live and care for the developing young. The top two boxes are supposed to be for honey storage but sometimes the queen starts laying eggs in the upper boxes too. If she does, the box is set aside until the bees develop.

When the boxes are filled with honey, they are replaced with empty boxes and brought in to the factory. They are stacked in a “hot” room for several days while the wax softens and becomes easier to work with.

Meanwhile, bees that inadvertently came along inside the hives escape to the steamy windows, trying to find their way outside. 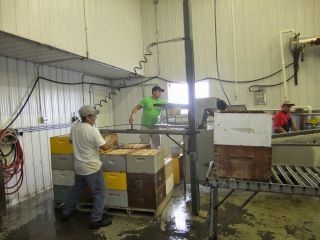 In the extraction room, contract workers (hired from Mexico or the Philippines) bring pallets of boxes from the hot room. They pry the top off each box with a special tool, and scrape beeswax from the edges and tops of the frames that are hanging in the box. Then they lift all the frames at once from each box with a machine that inserts them into a slanted conveyor. 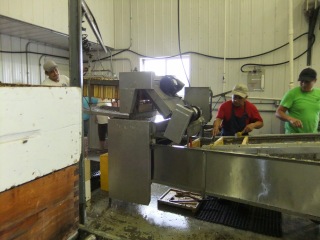 As the frames move up the conveyor, someone scrapes along the fronts of them so the honey starts to flow from each frame. Honey, wax, and numerous bees all drop into the trough beneath and flow down to a spinner. The spinner separates the honey that then flows up through pipes to other machines, which filter out the remaining bee parts and wax. The pollen, which has health-giving properties, is left in the honey. The pure honey is then packaged in various-sized containers for shipment to customers.

Nixon Honey Farm sells creamed honey, flavored honeys, and concentrated pollen. The beeswax is sold to people who use in in cosmetics, candles, and for other purposes.

Many people believe that honey is one of nature’s most perfect foods. It never goes bad. Because of its antibacterial properties it has long been used for healing cuts and scrapes (or sore throats and coughs), and bee pollen can build up immunity to seasonal pollen allergies.

And we wouldn’t have the taste of summer to remind us that January won’t last forever!