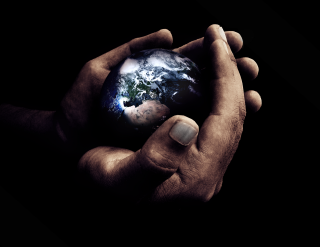 Though I usually try to concentrate on “sunny” stories for this blog, some of them illustrate that we live in a fallen world. I love the stories that show, even in a fallen world, how God watches over his people.

Our friend Stan (not his real name) is generally an exuberant, cheerful person, but one Sunday morning he seemed shaken. He told us what had happened the night before.

Stan had been working late on the house he is building at Darrington, about 40 miles from where he and his wife live. Finally, about 10:30 pm, he climbed into his truck and headed down the long road out of the mountains for home. No traffic shared the highway that time of night and it was very dark. His mind wandered to the tragedy that had happened the previous March when a huge landslide had obliterated a subdivision between Darrington and Oso and taken out a large section of the road he was now traveling on.

Suddenly, he came upon a small dark car driving slowly in front of him. As he prepared to pass, the driver jammed on the brakes and stopped, partially blocking the road. Stan stopped too, thinking perhaps someone needed help. The passenger door swung open. A man jumped out and ran back to the driver’s side of the truck. Shocked, Stan stared at a pistol pointing at his head! The man was shouting.

Stan rolled the window down just enough to hear the man demanding he give up the truck. The angry man beat on the glass with the gun and continued to threatened Stan with it.

Stan was utterly unprepared for such a situation. He was unarmed, alone in the dark, far from help. As he frantically tried to decide what to do, a light suddenly filled the truck. It illuminated the man threatening him. That man raced back to his vehicle and scrambled in. The driver took off.

Comprehending that the light came from another vehicle behind him, Stan hit the gas and swerved around the car in front of him. As he raced down the highway with two sets of headlights following him, he grabbed his phone and punched 911. One of the vehicles turned off after a few miles…the one with the would-be hijackers, he hoped. Just before reaching Arlington and the police station, the other turned too.

Stan hadn’t got a good look at his attacker, although he thought he was about thirty years old, He hadn’t seen the license number. He couldn’t even tell the police what kind of a car it had been. But he knew the Lord had seen what happening. Perhaps, he thought, God had sent an angel to shine a light in the darkness.

Stan is sure God allowed that wake-up call to shake him out of complacency. “We need to be more aware of our surroundings,” he said. “There are bad people out there and we need to do what we can to be safe.”

What could he have done in that situation to be safe? At first he was inclined to think he too should carry a gun, but he says his thinking is evolving. He’s trying to reconcile the command to do good to those who treat us badly with the instinct to fight back.

We can’t always know when we’ll find ourselves in a dangerous situation. But we can be prepared as much as possible. We can be aware of our surroundings. We can avoid risky circumstances. We can try to stay physically and emotionally healthy so our reactions are quick and our minds clear. And we can be spiritually prepared. That includes praying for those who would cause us harm, and it includes asking for God’s protection.

One thought on “A Light in a Dark Place”