As a child and later as a teacher, February was exciting to me because of the celebrations clustered in the middle of the month: Lincoln’s Birthday on the 12th, Valentine’s Day on the 14th, and Washington’s Birthday on February 22.

But in 1968, the days devoted to our two greatest presidents were swallowed by an all-purpose holiday called Presidents’ Day.

Washington’s birthday had been celebrated as a legal federal holiday starting while the first president was still alive. Later, our 16th president’s birthday (Lincoln’s) was set aside as a holiday by many states.

When Congress passed the Monday Holidays Act, they moved the official observance of Washington’s birthday from Feb. 22 to the third Monday in February. A popular misconception rose that the day had been officially renamed Presidents’ Day. The name change was never authorized by Congress, but still, it is used on calendars, in advertising, and even by government agencies.

“The probability that we may fall in the struggle ought not to deter us from the support of a cause we believe to be just; it shall not deter me.”
— December 26, 1839 – Speech on the Sub-Treasury in the Illinois House of Representatives

“When the conduct of men is designed to be influenced, persuasion, kind, unassuming persuasion, should ever be adopted. It is an old and a true maxim, that a ‘drop of honey catches more flies than a gallon of gall.'” — February 22, 1842 – Temperance Address of Springfield, Illinois

“It is said an Eastern monarch once charged his wise men to invent him a sentence to be ever in view, and which should be true and appropriate in all times and situations. They presented him the words: ‘And this, too, shall pass away.’ How much it expresses! How chastening in the hour of pride! How consoling in the depths of affliction!”
— September 30, 1859 – Address before the Wisconsin State Agricultural Society

“Fellow-citizens, we cannot escape history. We of this Congress and this administration, will be remembered in spite of ourselves. No personal significance, or insignificance, can spare one or another of us. The fiery trial through which we pass, will light us down, in honor or dishonor, to the latest generation.”
— December 1, 1862 – Lincoln’s Second Annual Message to Congress

I don’t have sources for these, but I like them:

“Don’t interfere with anything in the Constitution. That must be maintained, for it is the only safeguard of our liberties.”

“America will never be destroyed from the outside. If we falter and lose our freedoms, it will be because we destroyed ourselves.”

“Let us have faith that right makes might, and in that faith, let us, to the end, dare to do our duty as we understand it.”

“I have been driven many times upon my knees by the overwhelming conviction that I had nowhere else to go. My own wisdom and that of all about me seemed insufficient for that day.”

Here’s one especially for our politicians to think about:

“How many legs does a dog have if you call the tail a leg? Four. Calling a tail a leg doesn’t make it a leg.” 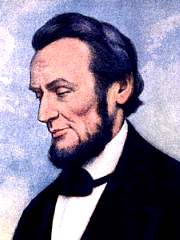