My mom didn’t keep a bunch of toys around. But the grandkids knew when they went to Granny’s house, they’d have all of her attention and the benefit of an inventiveness that snugged neatly into a child’s imagination. Whether it was a project as complex as a beanpole-and-blanket teepee or something simple as building little houses with Grandpa’s dominoes, time with Granny was time for making memories.

Here are Robbie and his cousin Mike, “fishing” in Granny’s sink. Their poles are drinking straws; their lines are string with safety-pin “hooks.” I don’t remember if they caught anything, but they sure had fun. 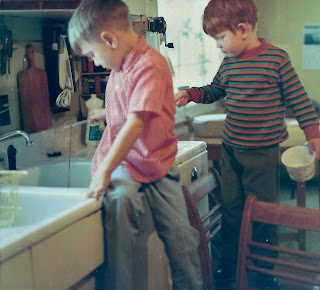 Rain, rain, rain! But the sun is predicted to return by the first day of spring, (next week…yea!) and the signs are all around us. Cherries in bloom, the first daffodils, rhubarb’s crinkled leaves unfolding from pale green knobs. I’ve even seen a few lethargic flies that managed to survive the winter while tucked away in dark crevices.

Long ago, another wet winter was dragging to an end. Robbie had just turned three. He was bursting with energy and kept me busy thinking up ways to keep him busy. One day as we drove to town he seemed particularly squirmy. “Let’s watch for signs of spring,” I suggested.

He was still for a minute, peering out the window. Then, “I see one! I see one!” he shouted. I pulled up at an intersection and looked around, wondering what he’d seen.

Of course. There it stood in all its glory…a bright red Stop sign! 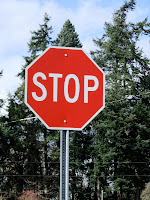 Lately I’ve been going through old photographs, trying to scan them into the computer before they are too faded to be worth keeping. Happy memories come back as I gaze at the images of my little ones and remember the funny things they did and said. They’re perfect antidotes for these gloomy, not-quite-spring days.

Kids are very good at finding unique uses for ordinary items. Every parent knows that cardboard boxes are the most entertaining toys available. 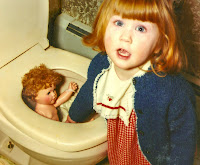 Another day I heard splashing in the bathroom, grabbed my camera, and peeked around the corner. My small daughter looked up. With pride she said, “My dolly clean!” 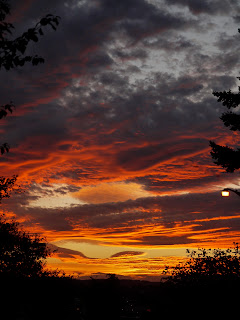 I just read Terry Esau’s book, Be the Surprise. He tells about being stuck in a 25-mile-long “parking lot” on I-17 in Arizona.

He and a friend had their bicycles in their van. Since no one could go anywhere, they set off on their bikes for the head of
the line. People were out of their cars, visiting, playing guitar, even barbecuing brats in the back of a pickup.

On their way back, someone called out, “Did you see the accident? We heard that a girl didn’t make it.”

That sobered Terry and his friend. By then, people were moving to the western edge of the highway, silently enjoying a gorgeous sunset. Terry watched too, thinking, “Maybe this sunset is for the girl at the front of the line.”

I thought of the night we got word that our friend Wanda was dying. We stood at our window, praying for her and her family, as the most beautiful sunset spread like a pool of molten gold across the western sky.

“Wanda’s crossing over,” I whispered to Hank. And a few minutes later, we received word that she had done so.

She’d reached the front of the line, and like the girl in Terry Esau’s story, she now stands with her Creator, knowing that last sunset was really just her first sunrise in eternity.

You may remember my post from last October, Our Salad-Bowl Nation, in which I shared photos of my “rainbow family.” I mentioned that we were awaiting the arrival of our newest member, a little boy from Korea.

Here he is, with mama Stacy and Grandpa Jim. His name is Max, and he’s still a little bewildered by all the changes in his young life.

Welcome to our “Salad-Bowl Nation,” Max. We’re thrilled to have you in our family. 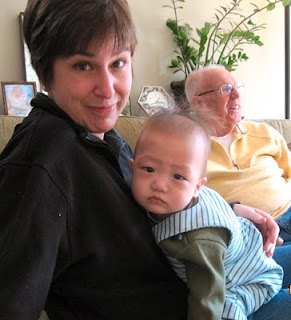 Rob Down had worked in management at a large Christian conference center for five years. But, a year and a half ago, like many other people in these times of economic stress, he found himself out of work. Rob had always enjoyed volunteering on missions trips and helping people in all walks of life. Now, too young for retirement and the volunteerism he loved, he couldn’t find a job.

Before his work at the conference center, he’d spent over twenty years as a licensed massage therapist. He remembers massaging his mother’s tired feet when he was a youngster. She always told him the Lord gave him gifted hands. Later, when his father was dying, he saw how the medical profession often fails to understand the needs of the elderly. He used his massage skills to bring comfort to his father and then to other older people.

During his long job hunt, Rob prayed for wisdom and God gave him an idea. He could combine his compassion for older people with his gift of therapeutic massage, and take it to senior centers, and other places where people needed that comfort and relief. Fifteen minutes of massage and encouraging conversation costs $10, or a prayer for the ministry, whichever people can afford. He calls his business “Pay or Pray Massage.”

Now Rob uses his gifts to do what he loves. And he’s making a living. How many people can say that about their jobs?

Stories like Rob’s can encourage us all to take another look at our God-given gifts and inspire us to ask God how He wants us to use them. Maybe some of us will launch out in new directions. Perhaps we’ll find, as Rob did, that being forced to change directions can be a good thing.